In the early 1920s leading cartoonists participated in the Artists’ Ball. This was an annual bohemian revel held at the Sydney Town Hall. When the revelry grew so boisterous for the more timid and elite fine artists that it was temporarily abandoned, the cartoonists took up the reins and for the next 30 years or so, continued to stage their own Black and White Artists Ball.

Out of these shindigs the Club grew. Named the Sydney Black and White Artists’ Club, its membership included every famous cartoonist in Sydney, such as Stan Cross, Jim Bancks, Syd Nicholls, George Finey and so many others.

However, realising that there were numbers of newspaper cartoonists employed in other states and in country areas, the Sydney group decided it was time to expand their membership and activities. The name was changed to the Australian Black and White Artists’ Club and the membership grew to more than 100 members. In 1984, the membership had grown to nearly 400 and it was decided by the national committee that it was time they had awards to be presented to winners in various categories and that an annual function should be held for the presentations.

In early 1985 the Awards Committee approached Mr Trevor Kennedy, then Editor-in-Chief of The Bulletin, to provide exclusive sponsorship for a series of annual awards for cartoonists and other newspaper and magagazine artists. 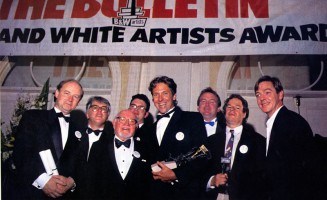 The Bulletin agreed to the sponsorship and named the event “The Bulletin Black and White Artists’ Awards” and the tradition had begun. Samples of members’ work was circulated to all members in the club in the form of the “voting book” and secret balloting by members for artists in six categories was conducted. The votes were forwarded anonymously to Peat Marwick and Mitchell, a leading firm of accountants who provided the names of the winners for the night. 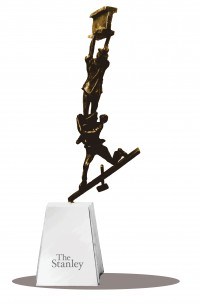 The club commissioned Eberharde Franke to sculpt a model of the well known cartoon ‘For gor’sake stop laughing, this is serious!’ by Stan Cross, one of the greatest members of the black and white craft and a foundation member of the club. Bronze, silver and gold statuettes were cast from the model to present to the winners at the inaugural Awards Night in Nov 1985.

With an increased public profile, the club has attracted other corporations who recognise the talent of our artists’ and their role in Australia. In 1989, The Australian newspaper sponsored the Bill Mitchell Award to be presented annually at The Stanleys as an encouragement award to young artists.

In Nov 2014, the ACA celebrated the 30th anniversary of The Stanleys in Sydney, NSW.